Blockchain and Evidence Records - A Match Made In Tamper Proof Heaven. 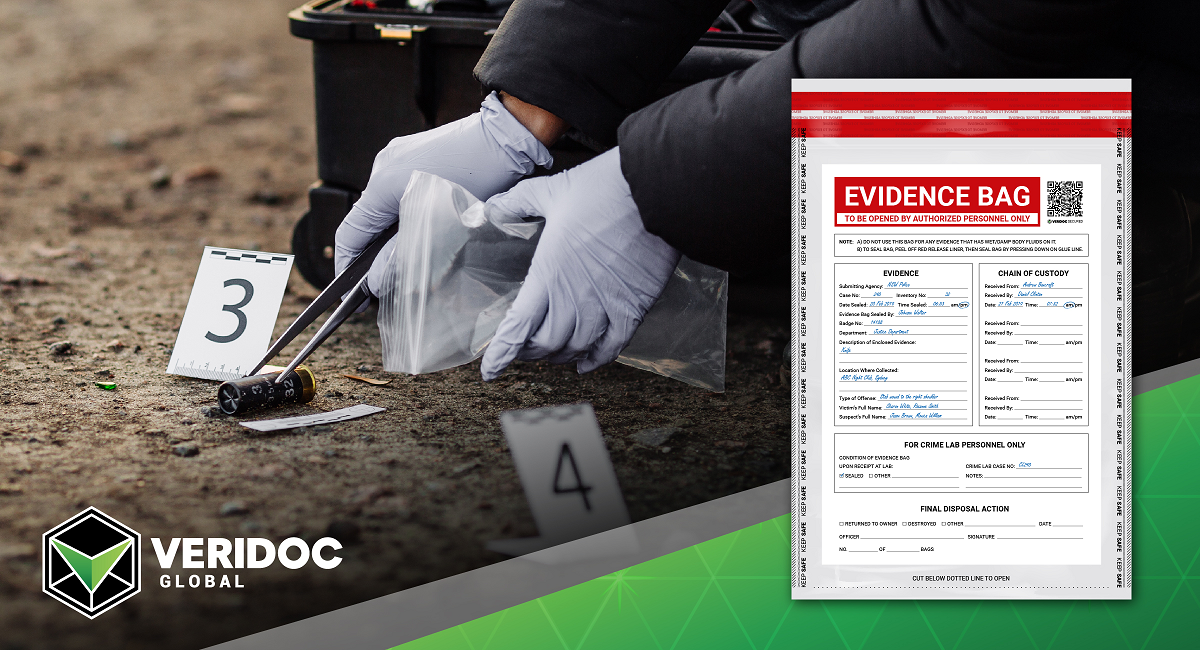 It's somewhat surprising to learn that most police departments from all around the world still work off procedures or laws governing evidence collection that has been in place for over 30 years, with no change. Police forces, prosecutors and the courts have needed to maintain a detailed chain of custody regarding all evidence for any criminal case, and as the times change and technology advances, you'd think it was only logical blockchain would have a role to play.

Currently, the tried and true method of an evidence locker, with a sign-in sheet storing the evidence is decidedly not tamper-proof at all and it only takes a quick search to find a number of cases where evidence has been tampered with at this exact weak point. Along with mishandling, poor documentation, and corruption can all be causes of a critical breach within the chain of custody. Greater oversight is needed for where, when, and how evidence is stored and handled. Using logbooks or spreadsheets to manage huge volumes of evidence is no longer justifiable.

But an evidence blockchain management system allows agencies to maintain chain of custody, evidence management while being able to view and verify all digital activity regarding evidentiary items. Being able to have a detailed audit of any changes to evidence as well as having absolute knowledge of who has submitted, accessed, updated, or deleted the information. Doesn’t that already sound better to you, than what is currently being used?

Though it’s not yet possible to physically store a bloody knife on the blockchain, it is possible to document who has handled any evidence, in addition to important information regarding storage methods and other critical information about that evidence. When it comes to evidence, tamper-proofing records of origination and chain of custody is imperative. With blockchain, not being controlled by any one party, being tamper-proof and interoperable, and allowing for sharing on a private or public network are all benefits that are fitting to the sensitivity and indispensable nature of evidence collection.

But what is blockchain?

At the core of blockchain, it is a decentralized database shared across a network. Unlike centralized databases, records are only accepted after attaining group consensus. Following this approval, records are stored in blocks and added to a public ledger with other blocks of recent records. The data in each block is passed through a hashing algorithm to generate an exclusive signature called a hash - a digital fingerprint that uniquely identifies the block. Each block’s hash value is not only dependent on all the data from the ordered records it contains, but also the hash value of the previous block. By capturing the hash value of the previous block, a connection is formed that links all blocks together in an unbroken chain. Once a block has been added to a blockchain, it can never be changed or deleted, which ensures the complete provenance of the data stored and makes blockchain ideal for record-keeping and is ideally suited for evidence collection. 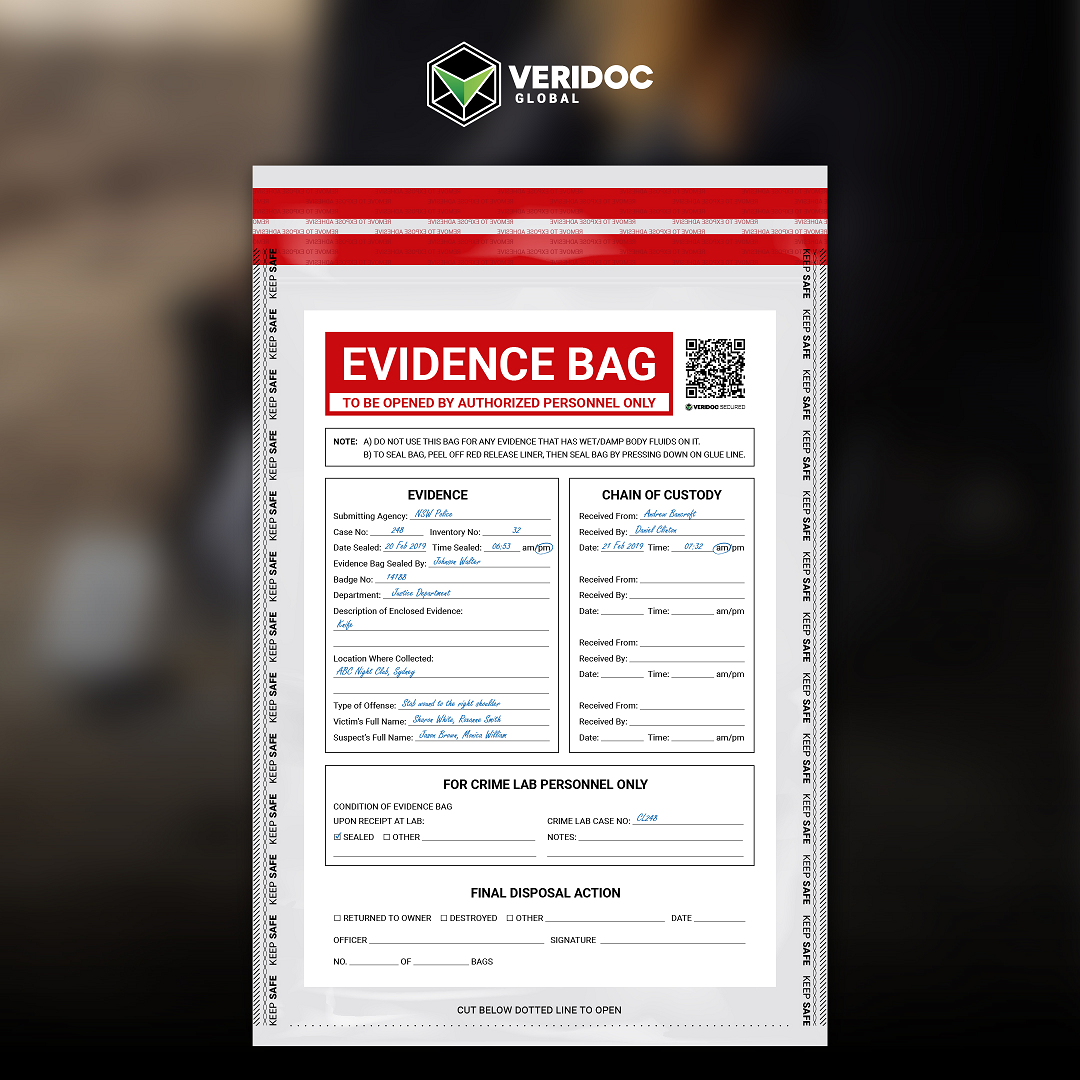 Let’s us the picture above of the evidence bag as an example. Scanning the QR Code with VeriDoc Global’s QR code reading app, verified users can see within seconds what has happened with the evidence bag from the moment it was sealed. The solution works with any smartphone and doesn't require any cost to the user. Try out the technology now for yourself, you can use any free QR Reader or you can download the VeriDoc Global app from the Play and App stores now.

The VeriDoc Global QR code reading app is a key component of the finished solution, which runs currently on the Ethereum mainnet.

Behind the scenes, the verification protocol uses VeriDoc Global Secured QR codes, encryption algorithms, unique hash values, and the blockchain to verify the moment the evidence has been collected and scanned. It also shows you a picture of the evidence bag, along with information and details on sealed, collected and transferred ownership of the evidence. Not only that, you can now see the record of everyone that has scanned the QR code. This essentially creates a digital logbook in which the entries can never be changed.

The VeriDoc Global app comes preloaded with Change of State (CoS) technology. This allows law enforcement, courts, and forensic labs the ability to control and view all changes relating to evidence ownership. With secure logins and scanning the QR code, it can add time and location stamps along with any additional relevant information each time the evidence is handled.

Better handling of evidence is just one of the ways blockchain could help improve the trust in the way police collect and use evidence against us. Blockchain holds the potential to help transform public knowledge and trust in law enforcement by improving the way agencies handle their most sensitive evidence and data, while also enhancing interagency cooperation and promoting greater public trust in the integrity of investigations.

In the end, we all want to know the evidence is true and hasn’t been tampered with. Unless of course, the evidence is on you and then, unfortunately, you’re out of luck.

Blockchain is here to stay and it’s only gaining more ground each day, with VeriDoc Global using blockchain to work towards, an open and honest future, one document and evidence bag at a time.

Vaccine Certificates and Passports: Fraudsters are Gearing up to Rake in the Cash